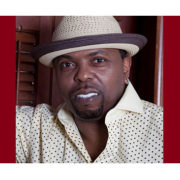 For over 30 years Glenn Jones has been using his gift to touch others in a way that only his voice can do. Just one listen to the proclaimed “Ambassador of Love” and you will know why the powerhouse vocalist and love song perfectionist has surpassed the test of time.

Born in Jacksonville, FL, Jones began singing at the tender age of four in the Pentecostal church. He was the youngest of ten and the only one with musical talent. At the age of eight Glenn recorded his first single as lead singer for the gospel group “The Bivens Specials” who could be seen weekly on the local Ken Knight gospel show in Jacksonville.

As a young teenager, Glenn formed a group called “Glenn Jones & the Modulations” recording two Albums. While taking a break from the Modulations, he went on tour as lead singer with the world renowned “Soul Stirrers” who were most famous for laying the foundation for the legendary Sam Cook’s career. Four years later at the age of 18, he met gospel great, Rev. James Cleveland, who wasted no time signing him to Savoy Records. His first of several projects was entitled “With A Made Up Mind” which included three duets with Rev. Cleveland with Glenn writing seven songs.

Glenn’s undeniable vocal talent had now caught the attention of legendary jazz artist Norman Connors who convinced him to be a featured vocalist on his 1980 “Take It To The Limit“album. The second single from the album, “Melancholy Fire” was Glenn’s first crossover success to R&B, and his first of many chart topping hits.

RCA was impressed and soon Glenn was signed as a solo artist releasing three albums with the label giving us hits like Show Me and I Am Somebody. In 1987, Glenn was signed to Jive records, where he wrote his signature song, “We’ve Only Just Begun”. Other hits like the #1 “Here I Go Again”, “Stay”, “I’ve been Searching” and “Baby Come Home”, continued to follow, rightfully establishing Glenn as the true “Ambassador of Love” that knows how to write, produce, sing, and present love songs that continue to surpass the test of time.

He has made musical magic with many powerful female vocalists, including Dionne Warwick (Theme Song from ABC’s Finder of Lost Loves) Regina Belle, Jean Carne and special requests for on stage guest appearances with greats such as the Queen herself, Aretha Franklin. But the truest vocal magic can be heard when Glenn and former label mate, gospel great, and wife of over 20 years, Genobia Jeter-Jones come together. The undeniable chemistry between the two can clearly be heard on singles like Don’t Walk Away, Where Is the Love, and Together.

Along his journey, Glenn combined his singing career with acting in various stage productions, including Sing Mahalia Sing with Jennifer Holiday, and David Payton’s When a Woman’s Fed Up.

In 2003 his song skills were recognized for writing and producing the hit “Never Let Go” for Gospel Greats The Canton Spirituals. The song featured Glenn and wife, Genobia Jeter Jones on vocals and resulted in a Grammy Award Nomination and a Stellar Award win for both.

In 2013, Glenn joined forces with his wife and niece, Sunday’s Best winner and 2012 Stellar Award winner Y’Anna Crawley, for the gospel single Every Day; and the single Because of You featured on Jimmy D’s compilation CD, shows that he is yet still a contender in the game. Most recently, Glenn has returned to his Gospel roots and collaborated with lead singer Melvin Williams from contemporary Gospel group, The Williams Brothers, with his latest single God is Good.

In an effort to give back to those in need, and keep music alive in the hearts of both the young and elderly, Glenn has established The Love Jones Foundation. The Foundation supports under privileged school age children by providing instruments, music education and mentoring through music programs; it also will establish a music ministry and music therapy for the often “forgotten seniors” in senior citizen and nursing homes.

Today, Glenn Jones is still one of the most sought after live performers in the industry. In addition to this, the God-Gifted vocalist has established a level of integrity and exemplary characteristics that are seldom found in this evolving industry. He is living proof of an unmatched vocal talent; an unblemished level of integrity; and an un-wavered faith. There is no doubt that the Ambassador of Love will always stay true to his talent, himself, and most importantly his God.