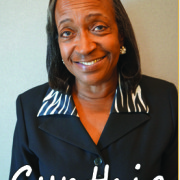 The younger of two children, a native of Tampa, Florida, Cynthia Williams Bailey was born in West Tampa and reared in the North West area of Tampa known as Keystone. (Citrus Park). Her talent of singing was revealed to her at the age of 5 when she started singing in the Church (which still exists known as First Baptist Church of Keystone). Every Sunday before the benediction was given, she would ask her Pastor Rev. Charlie Mobley if she could sing her song and he granted her the privilege. Cynthia only knew one song and that song was “I got a new home over in Zion.”

She is a loyal admirer of Aretha Franklin and Gladys Knight. As the years passed, she would sing in church, talent shows, Middleton High School Chorus, and the A. P. Leto High School Concert Choir. She began singing in the original Florida Mass Choir under the leadership of Rev. Arthur Jones and Rev. Milton Bigham. Branching off from the Florida Mass Choir, she joined the New Redemptive Ensemble of Tampa as a lead singer and recorded under Savoy records sing “Holy Boldness”. She has traveled extensively to New York and various other cities singing with the Ensemble along with the Rev. James Cleveland, and also in the Colors of Christmas with Roberta Flack, Melissa Manchester, and Peabo Bryson. The group also sang in many Gospel programs prior to the Mighty Clouds of Joy and Sarah Jordan Powell.

Singing has been a passion of Cynthia’s as well as playing the piano; however, the piano was short lived and she devoted her time to singing. She currently sings in the Sanctuary choir at Mt. Pleasant MB Church, at weddings, funerals, banquets and other events throughout the Tampa Bay area. She is in the process of doing an album which should be released by summer of 2016. She is thankful and gives God the Glory for giving her the talent of singing and the anointing to do it with power and aspiration.

About Moonie Louve
Scroll to top